Showing posts from June, 2008
Show all

June 16, 2008
My favorite weekend of the year has come and gone and once again it was a huge success. For the last 12 years I have been involved with the Easter Seals 24 Hour Relay for the kids. Originally as a runner and team captain and the last 8 years on the planning committee as the Volunteer Coordinator. http://www.24hourrelay.com/ The event is a relay that goes along a 4km course for 24 hours. Teams register and hopefully have at least 15 - 20 runners that take turns running or walking the course while raising money to send kids with disabilities to camp at no cost to their families. I know how important this is as I have a nephew who used to go to these camps and it was the highlight of his summers. These kids are amazing and the camps are astounding allowing kids to rock climb, canoe, and a zillion other things while hanging out with their friends. It shows them that they can when often they are told they can't. The weather was perfect and pretty much all of my close friend
2 comments
Read more

June Bug and her great Edge to Edge adventure. 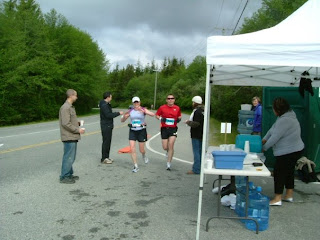 This past weekend I was in Tofino, on Vancouver Island to watch some friends - June (aka June Bug), Cory, and Carmen run the Edge to Edge marathon. June was going to try and qualify for Boston. Cory was recruited as her pacer and Carmen just wanted to run the course because she never had. The Shaunettes did a costume change to become the June Bugs and entered in a 5 woman relay team so that they could run and cheer. I got to do my first official stint as a cheerleader. What a great time - it was so much fun to actually be the one cheering and I now know why the girls love to do it. We headed over on Friday and after a few wrong turns (or lack of) we finally go to Tofino where we had rented a house for the weekend. The actual marathon is from Tofino to Uculet along the Pacific Rim Highway. In the first 10 km they actually run along the beach for about a km and then back to the highway and the view from the beach is stunning. Since my foot was still tender from the race the week be
Post a Comment
Read more

Best Day Ever.... June 1, 2008 Oliver BC I do not know where to even start - I guess with last year. Iron Mountain Triathlon - Whonnock Lake, Maple Ridge June 24th 2007 11 113 Shaunene Neilson DNF (unofficial time 8 hour - 52 minutes and some change) 5th Annual Persona Oliver Half Iron Triathlon June 1 - 2008 200 200/317 F 37/55 W4044 769 Shaunene Neilson 6:46:31 Yeah baby!!! Okay details - oh the details. It is best to start with the week and a half before the race - I have been riding with a group up Cypress on Wednesday nights. The second to last Wednesday I was out for my final Cypress ride before the race when my chain started skipping. Any time I got out of the saddle to accelerate the chain would jump and not to an easier gear! This was not good but I thought better now then on the race course. Took the bike into first shop and they replaced chain and cassette but it still was not fixed. Then the anxiety started to build - really hard to race
9 comments
Read more
More posts