A great day to be a Pace Bunny. 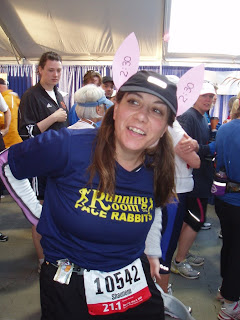 Weather was awesome – nothing but sunshine. Got down to the meeting place to grab my sign and found a bunch of anxious faces with a complete look of relief – I knew about half of them as they were from the clinic I coach/lead out of the Denman Running room. We headed off to the start chute a few asked for my bunny resume – I assured them that yes I had run a “couple” of half’s and was pretty sure I could get the 2:30 time and yes we would be running the 10 and 1 format.

During the first few km the group for the most part stayed with me- a few ran off ahead convinced I was going too slow. Off and on I would sing a few bars of the Sesame street tune – you know the one Mahnanah- doot doot de doot doot, Mahnahnah…. And tell a bad bunny joke every couple of km to keep spirits up. As we hit the half way mark the group all checked their watches and advised me that I was on time – whew that was a relief - actually we had a 10 second cushion but I was not about to point it out. In the Vancouver half around the 13km mark there is a 1km climb - it is the nemesis of a lot of people and so as we hit the bottom I started to sing the song my clinic sings during hill climb sessions – I feel good by James Brown. We got to the top and I looked around not bad 5 had stuck with me – pace up the hill 6:57/km. The five with me did a quick watch check and again assured me that I was still on time – they thought I had picked up the pace but now that they had checked they wanted to let me know I had not. (LOL)

When we hit English bay which is just under 4km I had 7 or 8 of the original group with me – I told them to get going. There was a moment of panic but we can’t leave the bunny – yes you can get going - get a sub 2:30! So with a firm but gentle push off they went. From this point on I started looking for people - I would jog backwards and just scan the crowd behind me – when I spotted someone I would start calling them and wiggling my finger – come on get up here. Then when they got to me I would say less than ….. km go and tell them to go. Then I would turn around and jog forward for a bit to watch them – if I came up on anyone that I knew I would jog up and talk to them -ask them what their power word was and if they did not have one I would remind them – you are an athlete – you have trained for this, you are strong and then give them a gentle push sending them off. I continued this for the entire last 2 km to the finish line. I crossed at 2:28:20 and then stood and waited calling from just beyond the mat – come on let’s go. I am pleased to say that
pretty much everyone crossed in 2:30. 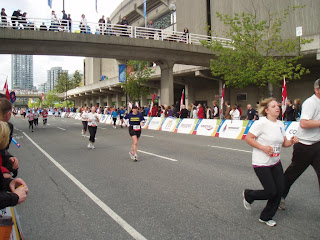 It was a great day to be a bunny and I am super proud of everyone especially my clinic members - what an honour and treat to be able to share in their triumph. It was also great to run into fellow team Nathan member Lillian and learn that she had a great race with a Personal Best in the Full. Team Nathan rocked it. Going forward I will be focusing on me – Oliver Half Ironman is 4 weeks away time to start visualizing my own triumphant finish!

Kirsten said…
In the words of Stormy: Go to your happy pace. Great work on yet another race leading folks to victory and a great run along the way.
May 5, 2009 at 3:45 PM

Janine Karlsen said…
Great post Shaun, it was pretty cool to hear the perspective of the pace bunny! Great work with your 2:30 group, and here's to you exceeding your goals for your race next month!
May 5, 2009 at 8:56 PM