The one I should have walked.... 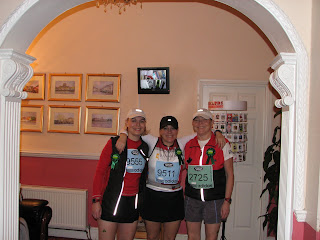 Well the last race for the year is done - Dublin marathon.  Mixed emotions to say the least.

Overall though I am satisfied - not my best showing by far but I got the bling and the shirt and # 5 under my belt.

The weather was absolutely amazing - actually regretted wearing a long sleeve shirt under my Nathan Jersey it was almost too warm.  As predicted Pam was the healthiest of the 3 of us.  June bug was totally siezed and was struggling with walking let alone running.  The plan was we would all start out together and just enjoy the day - no pressure, nothing to prove just get the bling and shirt.

Absolutely amazing to see over 10,000 people at the start line and spirits were high.  We had on our Irish for a day pins and shamrock tattoos.  We finally met our other girlfriend Hazel just before the start and we were off.  It took us about 8 minutes of walking to get to the starting line.  We all started out together and June was actually running but she quickly fell off within the first 1km or so and that brought us down to 3.    At this time I should have been rational and stopped running and went back to June but for anyone that knows me - well suffice it to say that did not happen.

So Pam, Hazel and myself were running a nice pace - this was Pam´s second marathon and she just wanted to be faster than her previous - 5:40 so the pace was quite leisurely at around 7:10/15 a km.  We maintained this off and on for the first 10km - during this whole time my right leg/hip/IT band was a little achy but same old - same old for me and of course I did not heed the warnings.  I was thoroughly enjoying the run with girls, the crowds and counting how many different colored front doors we could see.   Of note there is absolutely no crowd control after the start in this race so people, strollers, dogs, bikes, and cars!  randomly cross the course in front of runners when they feel the need to.  It is a little frustrating to have to dodge stuff at random continuously through a race.

The crowds were amazing and there were so many little kids - people literally line the course from start to finish and hand out stuff. I high fived lots of little kids but did not take anything from anyone since I have never tried any of what they were handing out. 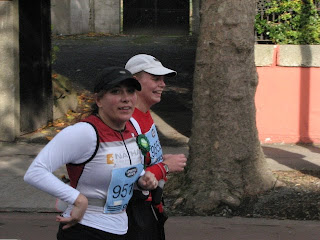 We continued our nice pace to the halfway mark and things were going well and that is when it happened - I pulled a Shaun and instead of being reasonable and rational and following the plan I had decided on for weeks I did it I picked up my pace and left Pam and Hazel.  I was feeling good the leg had settled into a dull ache - nothing new here so against all reasonable and better judgment I went for it - the next 15 km went great - I was strong on the hills, I was running 6:15 - 6:45 km quite comfortably.  Every once in a while I would think - this is not a good idea but then I would shake it off and continue on my merry path to self destruction. (LOL)

It was like a bad car accident - you know - you do not want to look but you just can't stop staring.  And then it happened KABOOM - mile 22 - OW - leg not too happy but not to worry still ahead of Pam and only 4 miles to go - easy peasy - just suck it up princess.  22.5 miles Pam and Hazel have caught up to me - right - should have just stayed with them - aw well just run it in with them - mile 23 - leg has now totally siezed up - send Pam and Hazel on their way.    Mile 23 - Mile 25 the limp/shuffle of shame as my leg is now totally refusing to cooperate and do anything I am asking it to do.

Mile 26 - I am now officially well over the 5 hour mark and chagrined over my foolishness however because I have  admitted to myself that I am dumb-ass my leg decides to rejoin my body and allow me to run/hobble the last mile to the finish in complete agony.  It is the one finish line photo where I am not smiling and I always smile - this one hurt.  Final time 5 hours and 30 minutes.    I did not even see all my family waiting along the finish chute!  Joe , as always, was at the finish line and just shook his head at me. He was like what happened to walking?  I said - ME - that is what happened. 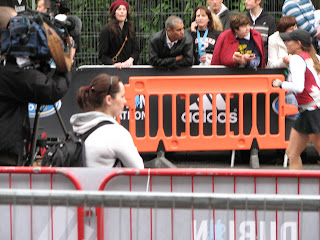 We waited for June who walked the race and finished in 5:59 - only 29 minutes behind me - again should have just walked it with her and I would have been much happier and in far less pain.  Pam did get her PB of 5:22 so that was awesome!

Overall I am okay with the time just miffed at my poor decisions - I knew I was not ready or prepared for this race - 7 weeks post Ironman - I was unable to train for 4 weeks due to a major sinus infection and then the longest run after that I got in was 2.5 hours - I had no business trying to run this.

I would do this race again in a heart beat it was well organized, crowds were amazing and the course is stunning the only thing that really bothered me was the absolute waste.  At water stations they hand out small individual water bottles and energy drinks in bottles - what people do is take a bottle - take one sip and then toss the whole bottle to the side - it was astounding to see and more than a little disappointing - there were thousands of water bottles and energy drinks with one or 2 sips taken and tossed to the side, especially when there are concerns about water shortage around the world - not to mention the hazard it caused to runners - I saw more than a few runners being taken from the course with sprained ankles which I am sure were due to stepping on a stray bottle.

I will post pictures when we get back to Canada - we are for 2 weeks of touring the Irish country side now.