April 06, 2009
Well since I figured I had used the girls in my application to Nathan and shamelessly promoted them as an asset to me and the team I figured it was about time that I formally introduce them.

The Shaunettes (I still feel a smidge embarrassed about the name, but they chose it and I was not involved) officially formed in June of 2007 to come out and cheer me during what I now fondly refer to as "the 9 hour Incident" - aka Iron Mountain Half Ironman Maple Ridge. It was my first half Ironman and the weather was horrible. I knew the girls were going to try and come out and cheer so I did expect to see them. I just did not expect the extent to how seriously they would be about it. But then these ladies are some of the closest friends I have made my entire life and I should have known - go big or go home.

Chris is my BFF and the founder of the Shaunettes. She is the lady who designed the original outfits - Pink shirts from the local running room with Shaunettes across the back and little bunnies (pace bunnies) on the shoulder. YOu can imagine my surprise when I first saw them - I was like how sweet they are all in pink - my fav colour and then they turned around and I could see the back of the shirts - I almost started cry. No-one had ever done anything so amazing for me in my life!

I do my races and my sports for me and grew up in a household where people were not very physically active. I did not have the "softball" mom and dad. Don't get me wrong they were encouraging. They made sure that anything I needed they got for me and allowed me to join any sport I wanted and helped me find ways to join. If there was a formal presentation, ie Dance Recital, they came out and when I first started playing softball they were there but I think it was mostly because they drove me there and then just waited till I finished. My dad practiced catch with me and I can remember my mom taking it very seriously that I had the right shoes for track. I remember she was pretty proud when I ran in the Manitoba marathon at age of 11 and 12 - don't worry it was 4 miles the first year and 6 miles the 2nd year still pretty good for back then, we did it as part of the Cross Country team. She would talk to me about my form but they did not come out to ball tourneys or track meets, it just was not their thing and it did not even really matter. So to have people drive out specifically to cheer for me and then to wear costumes was a little overwhelming.

Even my first half marathon I took the skytrain down, ran it and then took the skytrain home afterwards. Joe was working and it just did not occur to me that he should take a day off to watch me run. I remember everybody was shocked that I did not have friends and family "supporting" me on the course. I guess I am a practical person - work is $, $ pays bills, and well I do these things for me, my close friends back then were not runners so why would it matter to them.

Other founding members are Kirsten - aka Special K, Pam, and June - aka June bug. These ladies followed me along the course in the rain and wind and were there to the end along with Carol - Care Bear and Tiffany. Carol and Tiffany were not in costume but had been there the whole time from start of the bike ride. Care bear and Tiffany were officially recruited after Iron Mountain for Stormy Ultramarathon that summer. A 50 mile trail race that I had pulled a relay team together so we could go out and support our friends Cynthia and Victoria during their first Ultra - (we were not so foolish to want to do the full 50 miles). That was an amazing day - being able to return the favor to Cynthia and Victoria who had run the half marathon portion of Iron Mountain with me. While Cynthia and Victoria decline to wear the official regalia (they only do black or shades there of) and are a bit more sedate in their support. If I need them they will be there in a flash. 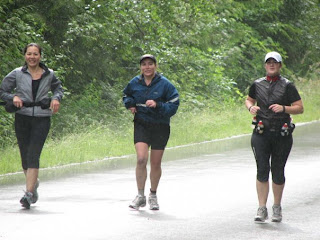 The group has evolved and grown in numbers in the past 2 years - with Chris taking a back seat to start a family, Kirsten has take over the roll of leader and planner. Which means that the girls outfits and plans get bigger with each event. Last year in Oliver they added matching pink skirts, signs, cowbells and a megaphone to their repertoire. Everybody in Oliver knew who they were and my Mom and father-in-law became honorary Shaunettes for the day. Other racers loved them because the Shaunettes cheer for everybody not just me - it is about supporting people on the course as they go for their goals.

But the Shaunettes also do costume changes when it is needed - in June last year I got to make the change from athlete to cheerleader while we cheered for June in her quest to BQ the Edge -to-Edge marathon. We were the June bugs and again we were loud and proud! It was amazing to have other spectators come up and say can you cheer for my daughter her name is .... and she is wearing number... SURE!

So the girls and guys have booked their rooms for IRONMAN and I know there have been meetings - I stay out of the planning and focus on my training. I have been told that myself and IMC will not know what hit them - I just tell them please don't get arrested (LOL). And now that I am on Team Nathan - I can't even imagine what they will do now - when I told Kirsten her voice went to high pitched squeaking which hurt me ears. However in the end if they just came and watched that would be more than enough for me. It is the thought that counts! 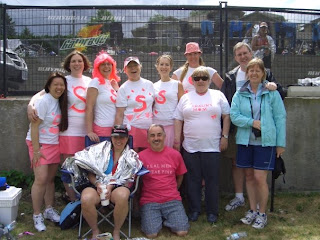 You guys are the Best!!!

Anonymous said…
You do it, we'll be there to support you!